Flea Prevention – An Important Part of Your Cat’s Monthly Regime

Making Sure Your Pet Guinea Pig is Properly Groomed

The site of a guinea pig nosing around in a pile of fresh shavings is an image that brings a smile to both parent’s and children alike.

A large population of adults have fond memories of the guinea pig they raised as a child. It doesn’t take a lot of encouragement before they are describing the way it looked and recounting the adventures they shared. Most parents who had guinea pigs during their childhood are normally quick to make sure that their children have a pet guinea pig to call their own.

Parents like the idea of guinea pigs as a child’s first gift for a variety of reasons. Compared to cats and dogs, guinea pigs are a cheap pet. Even rescuing a kitten from an animal shelter can cost more then fifty dollars, a young, well cared for guinea pig can be purchased for fifteen dollars. The average guinea pig doesn’t need as much veterinary care as a dog or cat. A guinea pig can be kept in the child’s bedroom, it doesn’t run around the house, disrupting the entire household. In short a guinea pig is a smart choice to teach a child about the responsibility needed to care for a pet.

One of the skills that children will develop when they are raising a guinea pig is pet grooming. Despite their diminutive size, guinea pigs, like dogs and cats, need to be groomed on a regular basis.

Parents who are concerned that their child will be lax about grooming their pet guinea pig should make sure that they purchase a short haired breed of guinea pig. The short hair will not tangle and mat like their long haired counterparts. Brushes that have soft bristles are the best for brushing guinea pigs, the soft bristles wont hurt the guinea pig’s skin.

When you guinea pig comes home, teach your child how to examine its eyes and ears and nose, to make sure that they are clean and free of debris. Show them how to use a warm slightly wet washcloth to gently wipe any mucus that might be accumulating in the corners of their eyes.

Guinea pigs don’t require a great deal of of brushing, and they shouldn’t be bathed. They do need to have their nails clipped. This is an activity that the parent needs to supervise. Explain to your child that they are not suppose to remove the guinea pigs entire nail, that the only thing that is going to be removed with the nail clippers is the sharp tip of the nail.

The biggest problem with guinea pigs is that they stink. The scent of an unclean guinea pig cage can quickly drive the entire family from the house. It is important to make sure that your child understand that it is extremely important to clean the guinea pigs cage every day. Explain that the health of their guinea pig as well as the family harmony depends on them keeping the cage clean and the bedding fresh. 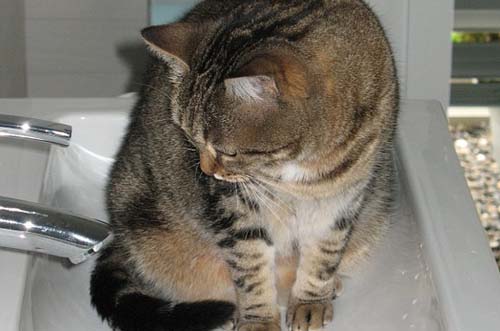 Flea Prevention – An Important Part of Your Cat’s Monthly Regime